Liolaemus is a genus of South American lizard family Liolaemidae. Its remarkable diversity in terms of species, ecologies, morphologies and life-histories makes this lineage a very attractive model system to investigate evolutionary and ecological problems. However, unlike other remarkable lizard adaptive radiations, such as Anolis and Sceloporus, Liolaemus lizards remain largely ignored by evolutionary biologists, although this scenario has steadily (yet slowly) started to change over the last few years.

For these reasons I have myself made Liolaemus my primary model system to investigate different question in evolutionary ecology, broadly speaking (although other model systems I have worked on are beetles and cockroaches). My collaborators and I have worked on a range of problems aiming to address a number of questions that we expect will contribute to reinforce the potential of these lizards as a splendid model system. Our research is active, and a number of studies are currently been conducted on these animals.

The Liolaemus genus is one of the most species-rich vertebrate lineages on earth.
In general, any attempt to summarize the entire diversity of species of this genus has faced controversy, as several herpetologists working on this group tend to have different views.

The diversity of Liolaemus lizards (figs. A and B) consists of more than 220 species occurring in a vast geographical area that covers the central-southern and southern portion of South America. Throughout this territorial region, Liolaemus have radiated for over 15 million years, and have adapted to one of the widest diversities of environmental conditions occupied by a single reptile genus. The environmental diversity exploited by these lizards ranges from the Desert of Atacama (the driest place on the planet) and tropical areas in Brazil, to Tierra del Fuego in austral Patagonia (the southernmost place where lizards have been recorded), and from sea level to more than 5,000 metres of elevation in the Andes. As would be expected, Liolaemus have also adapted to a remarkable diversity of microhabitats, such as trees, rocks, open grounds, loose sandy substrates, and bushy areas, among others. Some species have even been seen dwelling on snow (L. chillanensis) and water (L. neuquensis). As a result, these lizards have achieved an extraordinary magnitude of different sizes (from about 40mm snout-vent length, SVL, to more than 115 mm SVL), body shapes, patterns of coloration and life-history strategies, such as viviparity and oviparity.

An interesting contrast with the other two genera that form the Liolaemidae family is observed. The sister clade of Liolaemus, the Phymaturus genus (figs. C and D), is considerably less rich, consisting of about 30 named species. Also, although these lizards exhibit an important territorial distribution, they are restricted to Andean and Patagonian areas. More remarkably, Phymaturus species are consistently similar in their morphologies (although the patterns of coloration are very diverse), ecologies and life-histories. They are invariably viviparous, almost entirely herbivorous (some references to omnivory in P. zapalensis have been reported), and are primarily saxicolous. In addition, most species tend to live geographically isolated from each other, which collectively has led J. A. Scolaro and myself to suggest that it might be a non-adaptive radiation. Finally, the genus Ctenoblepharys (fig. E, provided by Alessandro Catenazzi), sister to Liolaemus+Phymaturus, is known on the basis of a single species (C. adspersa) restricted to the deserts of Central Peru. Therefore, the family Liolaemidae may well be regarded as an extraordinarily interesting model system to investigate a myriad of questions in the fields of evolutionary biology and ecology.

The potential of prominent adaptive radiations, such as Liolaemus, as model systems relies critically on the availability of phylogenetic information about species and lineage relationships. Although the phylogenetic tree for Liolaemus lizards is far from being entirely resolved, considerable efforts have been made over the last decade. So far, most of my own research on the evolutionary ecology of Liolaemus has been performed on the phylogenetic hypotheses proposed in two previous studies (Espinoza et al., 2004, PNAS 101: 16819-16824; Abdala, 2007, Zootaxa 1538: 1-84). While the former presents a tree for Liolaemidae lizards in general, the later concentrates on a tree for the boulengeri clade of Liolaemus species. These two hypotheses, inferred from combined molecular and morphological data, might be regarded as some of the most important available ones (which complement Schulte et al.’s 2000 influential study). Currently, significant efforts are being made to produce a larger (containing much more species) phylogeny based primarily on molecular data. While these new results appear published, I present below a phylogenetic tree for the genus. This tree is based on a combined tree from Espinoza et al.’s and Abdala’s studies. Given that several studies have consistently revealed that the boulengeri clade is a monophyletic lineage nested within the Liolaemus genus, in the figure below, the entire boulengeri clade in Espinoza et al.’s has been directly replaced by the phylogenetic tree inferred for the boulengeri clade by Abdala, which contains more species. 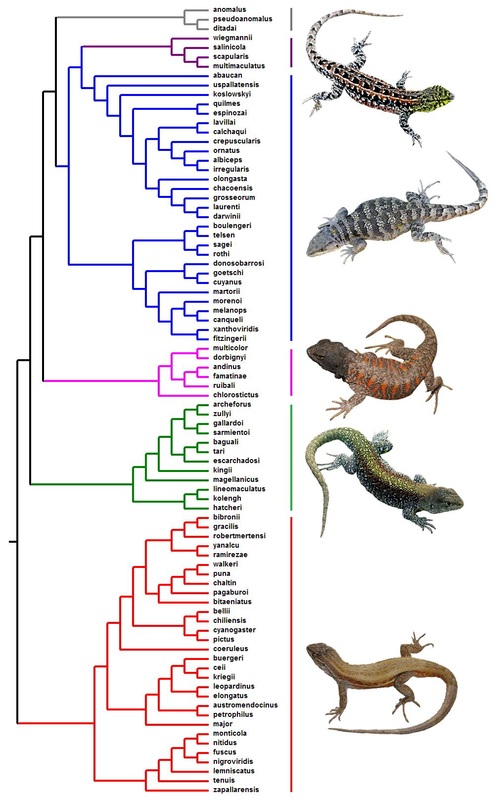